A Blessing That Goes Both Ways: Sponsors Meet Their Sponsored Child After 18 Years!

They stood behind the security checkpoint, hands clasped, tears welling up in their eyes, staring at the face that had smiled from their file cabinets, fridges, and bulletin boards for the last two decades.

The Kitsap County Clerks’ office had sponsored Steven together since he was nine years old and first came to live in Children of the Nations’ (COTN’s) Children’s Homes in Malawi. Over the years, the clerks had written him letters, sent him photos, prayed for him, and dreamed about meeting him in person one day.

Steven was born into poverty in rural Malawi. When he was just three, his mother died of cerebral malaria. His father abandoned the children she left behind, so Steven floated from relative to relative, barely surviving. “I remember when I would cry from hunger, my grandmother would cry too, not knowing what she could do to help me,” he says. 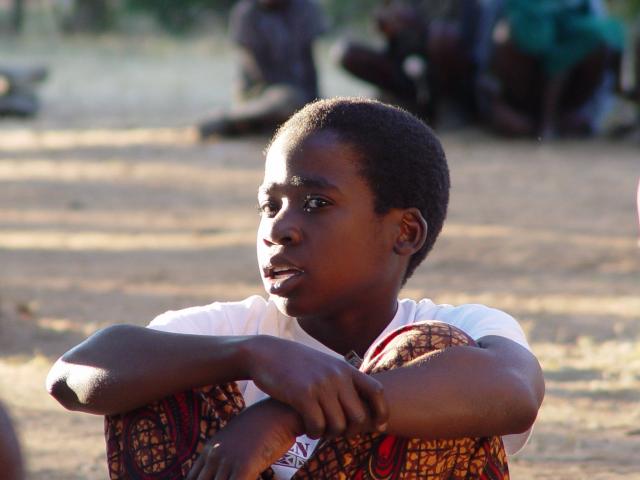 Steven was nine years old when he came to COTN and the Kitsap County Clerks started sponsoring him.

Eventually Steven was referred to COTN’s new Children’s Homes in Malawi—family-style homes where orphaned children could live with all the benefits a family would give them. COTN relies on sponsors to fund this care. When Brenda Wilson and Jan Williams, who worked at the clerks’ office, heard about child sponsorship through COTN, they convinced the whole office to help sponsor Steven.

Over the years, Brenda, Jan, and the rest of the office saw him grow into a young man. The office supported him through college and rejoiced with him when he graduated with his degree in accounting. Once he graduated, they stayed in touch over Facebook, encouraging him and sending him messages as he made the decision to move to Haiti to work for COTN’s newer ministry there. This July, Steven came to Silverdale for training at COTN’s international headquarters. 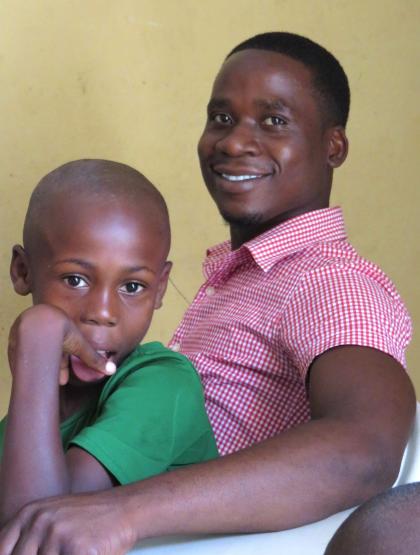 Today, Steven is a missionary serving impoverished children in Haiti.

“I cried when I found out he was coming to Washington,” says Cathie Blackstock, a retired clerk who organized Steven’s sponsorship for many years.

“I have waited for this moment for so long,” Steven said under his breath as he entered the courthouse.

Alison Sontag, Kitsap County’s elected Clerk, was waiting for him as he passed through security. They were overcome with emotion as they embraced one another.

“I can’t believe this day has come,” she said. 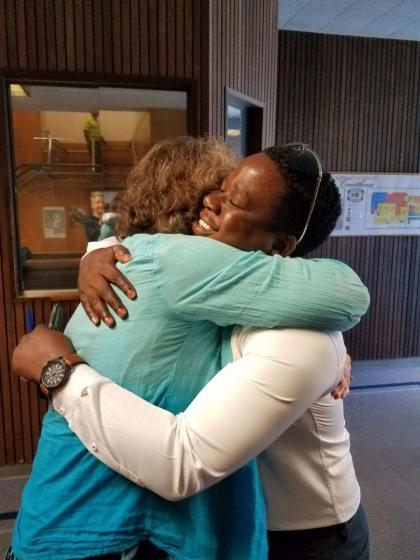 Alison and Steven embrace after waiting to meet for many years.

Alison Sontag and Cathie Blackstock led him down the hall where several of their coworkers were waiting with pizza and brownies.

“These are your aunties!” Cathie introduced him to each clerk who had helped sponsor him. But Steven already knew them all by name from the photos and letters they had sent. 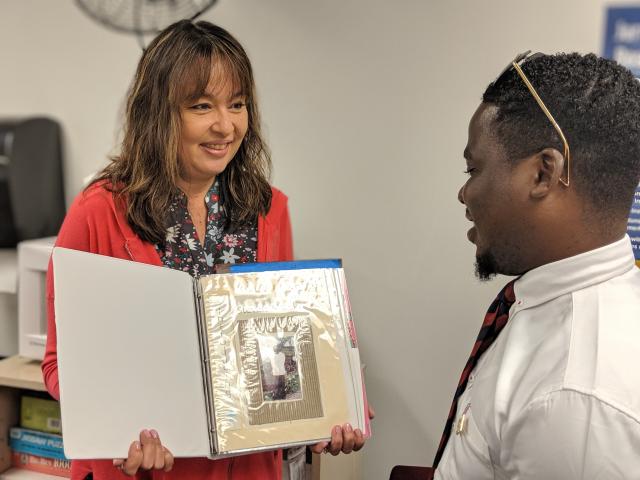 Sharon Gibson presents Steven with a scrapbook of his letters and photos.

Then they surprised Steven with a scrapbook filled with every letter and picture they had gotten over 14 years of sponsorship. They laughed that it was like his baby book, and crowded round to look back over his first pictures and letters.

“We made a routing slip for his letters, so everyone in the office, even if they didn’t contribute, read them, and was affected by them,” they explained. “It really brought our whole office together.” 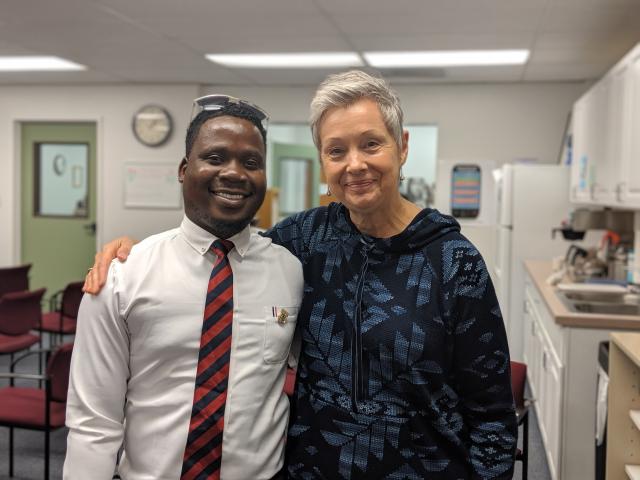 Steven and Cathie Blackstock, meeting in person at last.

“You know, it’s you guys who inspired me to do what I’m doing today,” Steven shared with them as they ate together. “People like you used to come to visit us, and I just kept asking myself, what is it that makes them leave their comfort zone to come to us? They didn’t care that we had snot all over our face and we were covered in dirt, they would still play with us. What makes people give to support kids like me?

His “aunties” nodded in recognition as they remembered his letters from that year.

“Your support really has made an impact on me—in so many ways.”

Today, Steven is working with children in COTN’s Village Partnership Program in Haiti—children who are orphaned and impoverished like he once was. “I wanted to go back to Malawi, but I love the kids so much,” he shared. 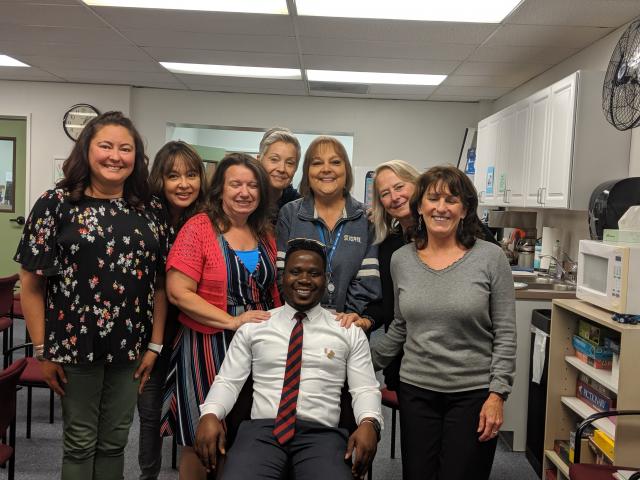 Steven with all of his “aunties”, who have been his friends and prayerful supporters for 18 years.

As the lunch came to an end and Steven finished posing for pictures and hugging each of his honorary aunties, Cathie pulled him aside.

As she gazed around the room of her misty-eyed co-workers, she looked Steven in the eye. “Know that you have been as much of a blessing to us as we ever were to you,” she said.

P.S. You can experience the blessing of sponsorship too! Consider sponsoring one of the children who Steven works with in Haiti.